Life on Land: The evolution of five fingers and toes 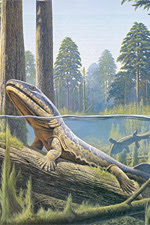 Well it didn’t take long for avid readers to spot the oddity in Friday’s posted picture of the early tetrapod, Acanthostega. This strange animal did not have the ‘usual’ number of digits, instead it had eight. Having more than five fingers or toes is called polydactyly and is a rare condition.

So what about Acanthostega and his buddies? The Late Devonian was a busy time, plant life was diversifying and insect life was gaining ground on land. Tetrapods, were making their first steps on to land and living semi-aquatic lifestyles about 375 million years ago. These animals had many characteristics advantageous to aquatic life, such as streamlined bodies, webbed feet and tail fins. But they also had weight-bearing limbs with which they could lift themselves out of the water. Acanthostega had eight digits on its front and hind limbs and two other early tetrapods, Ichthyostega and Tulerpeton, also had more than five digits.

So how could these animals have had such a wide variety of limb structures when all of their descendants seem to have a variation upon the five digit structure? It is thought that pentadactyly evolved in an animal that was ancestral to all present day tetrapods (amphibians, reptiles, birds and mammals) and that this event event happened 340 million years ago in the Lower Carboniferous (about 35 million years after the first tetrapods evolved). 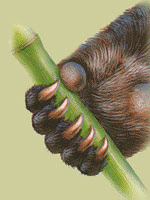 To be honest, we don#t understand how these animals could have been so experimental while their descendants were so conventional. And why 5 anyway? No one knows. And we have no examples to examine. There are few animals who have extra digits. The most common is the novelty polydactyl cat, but this species is the result of selective breeding of animals with a genetic anomaly.

In a general sense, we know that it easier to ‘lose’ a trait then to gain it, hence the large number of animals who have reduced digits. But the striking lack of polydactyl examples in the long history of tetrapods since the Devonian implies there may be an evolutionary constraint at work. For example, pleiotropy is the multiple effects of genes on more than one physical characteristic. Hand-Foot-Genital syndrome illustrates such a condition. This rare disorder malforms limbs and the urinary system because the same defective genes pattern both systems. So perhaps the constraint on tetrapod limb structure is part of a greater pattern.
at 11:22

I've always wondered if Acanthostega, Icthyostega, etc. are just the "dead-end" experiments with polydacyly, and there's just an as-of-yet-undiscovered five-fingered tetrapod from the same geologic age.

I always thought that 5 wasn't the limit, and there were many species unknown to me that had more than that. I didn't think that getting some more would be much of an issue, and may be the character would quickly get fixed, if advantageous.

So, we can't have more than five 'cause otherwise other parts of our bodies would not develop correctly. Again, Wow!

Several years back, I remember a video I watched before called the ostrich people who lived in a certain remote community where everyone there had feet like birds. I was a bit younger then and if I am not mistaken, this was on Ripley's Believe It Or Not. I may be mistaken but maybe this is something worth looking in to for your blog.

I'm back and was searching about the ostrich people, and found it on Wikipedia. And in my search for photos, I also found this site with a page on polydactyl cats. I remember my own cat having an extra useless "thumb." Useless because they were like dead and was just hanging there. But I think that cat was a real genetic disorder in many ways, since one paw had an extra "thumb." The other paw had two nails on one digit. The cat was pure white that his eyes were very noticeable. One was blue and the other was green.

But just a background on it... when it was still a kitten, it was a stray kitten that took a ride in our car, that seemed to climb under the car and ended it's way near an area near the car battery and was securely there until we got home from a bowling trip that was just about 1 kilometer away. He was kitten although he was big enough not to depend on his mother. For me he was the best cat I had. I had cats since 1978 up to today.

When ever we go back to the bowling alley we kept going to... I noticed by the side of the building, is a big trash can and some trash dumps near it where several stay cats go to. I am not surprised if my cat's mother was probably one of them feeding on all these trash while she was pregnant.

WOW! Is this the longest comment I made in history? Hahaha. This is good enough as a blog post. Haha. Well I guess there is no other place to share it but here.

WOW!
You'll be explaining about the congenital abnormalities of Springfield next....why do the evolutionary characotrs have 3 fingers? a local nuclear power station or just easier to illistrate!

I (in my simple minded capacity), guessed the extra fingers where 1/2 evolved fingers, not yet made there evolutionary way from fins.

I think this site is toooooo clever for me!

The reason for the ubiquity of pentadactyly is the fact that the Hox-4 genes that express digit formation, have a gene-level constraint of five encodings. In other words, there are only five sets of information that each describe expression of a unique digit.

Polydactyly is common, but you will ALWAYS find that the extra digit is a copy of one of the other five, never unique.

Pentadactyly is neither adaptive nor contingent. Natural selection actually had nothing to with it. The 5-only contraint on the Hox-4 genes were in place long before terrestrial vertebrates evolved, and long before nature moulded fins into limbs.

Pentadactyly isn't a mystery, but the ancient five-way Hox gene contraint that caused it eons afterwards, is.

Nice fill someone in on and this enter helped me alot in my college assignement. Say thank you you for your information.